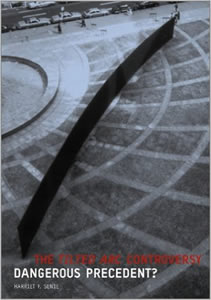 Since its installation at and subsequent removal from New York City’s Federal Plaza, noted sculptor Richard Serra’s Tilted Arc has been a touchstone for debates over the role of public art. Installed in 1981, the 10-foot-high, 120-foot-long curved wall of Cor-Ten self-rusting steel instantly became a magnet for criticism. Art critics in the New York Times and the Village Voice labeled it the city’s worst public sculpture, and many denounced it as an example of the elitism associated with art and as an obstacle to the use and enjoyment of the plaza.

Harriet F. Senie explores the history of Tilted Arc, including its 1979 commission and the heated public hearings that eventually led to its removal in 1989 (it was dismantled and is currently stored in a government warehouse in Maryland). Analyzing the archive of popular opinion, Senie shows how the sculpture was caught in an avalanche of shifting local and national discussions about public funding for the arts. She examines the tactics of those opposed to the sculpture and the media’s superficial and sensational coverage of the controversy, reframing the dialogue in terms of public art, public space, and public policy instead of the question of whether the removal of Tilted Arc was poetic justice or a dangerous precedent. Senie provides an enlightening history and analysis of a controversy that will continue to inform our discussions about public art for years to come.

“An important contribution which examines the aftermath of the Tilted Arc episode in terms of its relation to larger questions of government censorship of the arts and debates over arts education budget cuts.” —Sculpture

“Senie offers significant insights into the Tilted Arc controversy, especially into its role in exposing the rupture between the more difficult forms of contemporary art and its various publics and its place in the continuing debate about the character and meanings of public space in a democracy.” —John Beardsley, Harvard University Graduate School of Design