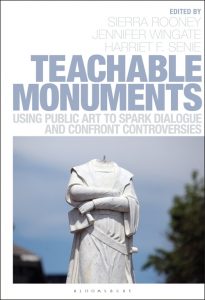 Monuments around the world have become the focus of intense and sustained discussions, activism, vandalism, and removal. Since the convulsive events of 2015 and 2017, during which white supremacists committed violence in the shadow of Confederate symbols, and the 2020 nationwide protests against racism and police brutality, protesters and politicians in the United States have removed Confederate monuments, as well as monuments to historical figures like Christopher Columbus and Dr. J. Marion Sims, questioning their legitimacy as present-day heroes that their place in the public sphere reinforces.

The essays included in this anthology offer guidelines and case studies tailored for students and teachers to demonstrate how monuments can be used to deepen civic and historical engagement and social dialogue. Essays analyze specific controversies throughout North America with various outcomes as well as examples of monuments that convey outdated or unwelcome value systems without prompting debate.