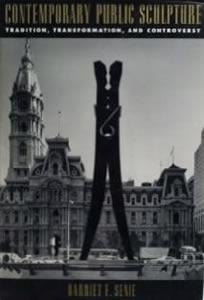 In the twentieth century, public sculpture has changed almost beyond recognition. Works inspired by classical and renaissance traditions—imposing equestrian monuments and triumphal arches—have been replaced by works such as Claes Oldenburg’s Clothespin and Christo’s Running Fence. This break from tradition has led to radically different approaches to public sculpture—but not without bitter controversy in the art community and the general public.

Contemporary Public Sculpture offers the first comprehensive look at the development of contemporary public sculpture. Beginning with the revival of public sculpture in the 1960s, with the work of Picasso, Calder, Moore, Nevelson, and others, Senie traces the various developments that defined a new civic art which substituted the artist’s fame for public content and sparked debates about cost, the role of government, and the place of public art in a democratic society. She shows how the growing irrelevance of traditional memorials resulted in new approach to the genre defined by Maya Lin’s Vietnam Veteran’s Memorial, which set out to “heal a nation” rather than glorify a military event by honoring victims rather than heroes; and how dissatisfaction with modern “glass box” architecture and its surrounding barren urban spaces led architectural firms like like Skidmore, Owings, & Merrill to use art to enliven both. Senie discusses how the earthworks of Robert Smithson and others inspired public sculpture that brought various landscape elements into urban sites; and she explores works by George Sugarman and Scott Burton that combine sculpture and furniture, changing the very idea of public art by creating a stage for public life. Finally, she examines the controversies that arise when citizens (including press and politicians) confront publicly funded work—such as Joel Shapiro’s so-called “Headless Gumby” or Serra’s Tilted Arc—that defies their sense of what public sculpture should be.